You may have seen Kanazawa was selected by the Guardian newspaper as one of their Holiday Hotspots for 2015. Kanazawa features on several of our tours, both small group and self-guided, and is a favourite destination among everyone here in the UJT offices. Today we're going to dig a little deeper in Kanazawa and discover this beautiful city.


Kanazawa takes about 4 hours to get to from Tokyo, or 2 and a half hours from Osaka. This might seem like a long trip, but in spring 2015 there's is a new shinkansen (bullet train) line that will take you from Tokyo to Kanazawa in about 2 and a half hours. Kanazawa was lucky to escape the worst of the World War 2 air raids and still retains a lot of it's heritage as a result. Parts of this lovely town remind us of a smaller Kyoto with a well preserved geisha district with original tea and samurai houses on display. Kanazawa is perhaps more famous for housing one of Japan’s top three gardens; Kenrokuen Garden, located next to the garden is the 21st century Museum of Contemporary Art, also a major attraction if you’re seeking a bit of quirkiness on your trip!

Kenrokuen Garden is huge, it's 105,000 square meters and took 170 years to build. It's one of Japan's top three gardens. Originally built as a pleasure garden for the local lord to stroll through, it expanded over time and is now open to the public for a small fee. If you are lucky enough to be in Japan in cherry blossom season, entry to this amazing park is free! The garden is also home to a number of other wonders including the oldest fountain in Japan, a 300 year old tea house, the Kotojo-toro lantern, emblem of of both the park and Kanazawa, and in winter features yukitsuri, ropes arranged in a cone shape around trees to help them survive the winter snows.

This area, located near Kanazawa castle, is where the samuari of the town used to live. Samurai are often portrayed as warriors, but samurai was more of a social rank that an occupation. This area contains many restored, traditional style samurai houses, some of which display all the trapping of samurai life. Allow yourself to be transported to an older time, soak in the atmosphere and just picture yourself as a samurai strutting through the streets as you go about the business of your lord.

Chaya literally means "tea house", and during the Edo period were located in the entertainment districts. At the chaya customers would eat, drink and be entertained by a geisha's singing and dancing. Like Nagamachi above, the three main chaya districts (Higashi-Chayagai, Nishi-Chayagai and Kazuemachi) are from an older time, and with paved streets and wooden buildings it's not too hard to imagine yourself being transported back a few hundred years. Higashi-Chayagi is the biggest of the districts and some of the chaya are even open to the public. You may even see a geisha on her way to one of her engagements in the chaya districts! Kanazawa is the only place outside of Kyoto where real geisha can be seen walking the streets.

Just when you thought Kanazawa was getting old, with nothing new to offer, you come across this museum. Located across from Kenrokuen garden, the Museum of Modern Art is one of Japan's most popular museums. The museum building itself is a work of art which has to be seen, and if your enter you can expect to see temporary exhibitions from world famous modern artists. There are also a number of permanent exhibitions to be enjoyed for free by the public. If you visit Kanazawa, it's worth going, if only to see the ultra-modern museum compared side-by-side with the more traditional aspects of the city.

There you have it, a brief introduction to Kanazawa, one of the Guardian's 2015 Holiday Hotspots. Kanazawa features in several of our tours and can be added to any tailor made tours. This includes Japan Discovered, which still has a 10% discount off the May and September departures. If you're interested in visiting Kanazawa, why not contact us and we'd be more than happy to draw up a proposal for you! 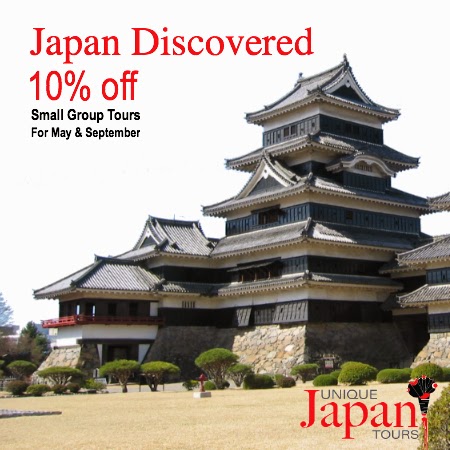 Have you even been to Kanazawa, or would you like to? Pick out some highlights and let us know in the comments below.

Posted by Unique Japan Tours at 17:42