Written by: Gail Gold who joined a self guided tour including Tokyo, Kyoto, & Takayama.

Japan, to me, is where the future meets the past. You see it every day in every aspect of life.  The first thing that struck me was the immaculateness of Japan.  You see it on the streets, on any form of transportation.  In 9 days I never saw 1 piece of trash, no graffiti, no urine smells.  Everyone is clean, every place is clean. As a matter of fact it’s difficult to find a trash basket. When I asked why was that? The reply was fear of another bomb being thrown in the trash.  The bus stations are even vacuumed, rag rubbed, polished. 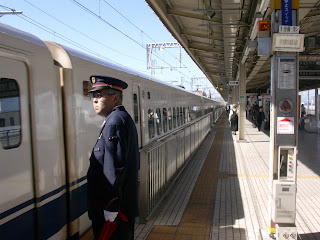 The future is the transportation system from metro, diesel bus, (of course no fumes, so no dirt) express and bullet trains. You don’t realize how fast you’re going on the bullet trains. They are the models of efficiency.  They smoothly glide up to you unexpectedly, and then whoosh you off to your destination.

The past is the old and architectually beautiful religious structures of Shinto shrines and Buddhist temples, sand and rock gardens, mossy gardens, stone pagodas and course the gorgeous pink and white cherry blossoms. I even saw the rare plum blossoms my first few hours in Kyoto.  There is a peacefulness and calmness to the gardens. 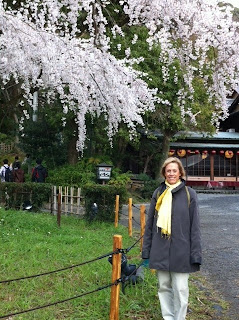 The past is also the magnificent kimono clad women-hair swept up to show the delicate nape of the neck. They look like China dolls with full red lips and clear skin.  Asian women don’t go near the sun, but carry parasols to ward of that forbidden star most of us love.

I never saw 1 fat person.  Not 1.  Given the Japanese diet of fish and vegetables plus omission of sugar, butter, starch there’s no way anyone could gain weight.  Miso soup is a breakfast, lunch, and dinner staple.
Discipline and respect are evident in everything: waiting for a stop light to change, no one jay walks. Everyone waits in line until it’s their turn.  Those who know me will understand: I couldn’t do the “excuse me sir” to ask a simple yes/no question.  I waited in line, for a long time just like everyone else.  They bow….oh do they bow.  They bow upon meeting another person, the train conductor bows to you every time he enters and leaves your train car, the maitre d bows when you walk into the restaurant, the maid bows to you as you pass in the hall.  They bow.

The best of all was waiting in line at Takashiyama, my favorite NY store, until it closed last year.  At 10am there was a formally dressed man or woman at each entrance door, all the doors automatically opened, and they bow to you upon entering the store.    They greet you with a smile are actually happy to have you shop there….a little different here.

Patience: When waiting for the bullet and express trains, everyone lines up by their car number, in a single line. No pushing, no butting in-just waiting patiently to enter the train. Then you go to your assigned seat.  Same for the movies-assigned seat-I saw Les Mis in Kyoto- English w/ Japanese sub titles.

Clothing: The Japanese are a formal, purposeful people,with a refined sensibility.  They are dressy, not informal at all. Men wear black suits and ties from 6am at breakfast in the hotels, from 6am boarding the train for the days work. When traveling on Sundays I saw the black suits and ties everywhere.

Language and money:  Outside of Tokyo, NOONE speaks English.  And not that many speak English in Tokyo.  For sure the 3 other towns I visited: Kyoto, Nara, and Takayama
I relied on my smile and in most cases it worked.  Japan is a cash society.  In Tokyo credit cards are taken in some big stores, but certainly not everywhere.  The other 3 towns were strictly yen.  There is NO TIPPING in Japan….NONE, NEVER.   How about that?  And did I mention NOONE speaks English and when they do it’s very difficult to understand them as they substitute l/r, so Gail becomes Gar.  With no TH, few S sounds, it’s really a speech pathologist’s dream to do therapy with them!! 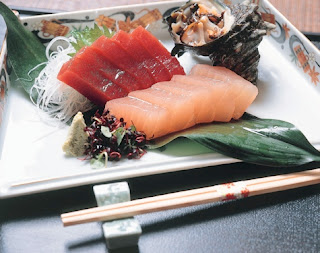 Food:  a typical breakfast was miso soup, varieties of fish, different vegetables, lots of cabbage & tofu, salad, rice, sushi, beans.  No oatmeal for me. No toast. None of my homemade raspberry jam.  No hot cocoa, but lots of green tea. And more green tea.
REALLY AND TRULY I was pickled, fermented, soy sauced, and tofued to death.
A few nights I had a custard from the convenience store, like a 7-11, that everyone buys at.
I wonder doesn’t anyone cook in Tokyo? They all get ready made food to take out or eat in restaurants.
But they use those chopsticks with such delicateness and elegance.  I became much more proficient at using them, but sushi still leaves me cold.  The diet seems very repetitious to me.   I was craving a little French or Italian or Thai after a few days.  There are huge food emporiums everywhere with much prepared food for take out.
There was a very well known sushi restaurant by my Tokyo hotel.  It was a small place with a conveyer belt circling the counter and you picked your individual plate w/ 1 piece
of sushi.  Put it down in front of you, eat it.  Take another plate of your choice when it came around-so people had 8,9, 10 little plates in front of them and that’s how the owner knew how much to charge you-by the number of plates.  Really cute and reminded me of the same type of Chicago restaurant when I was a little girl and got such a kick out of it.

Highlights:   One of my fondest experiences and memories was staying in the small town of Takayama, reached by a bullet and express train.  Ever since I did an Elm Place School report in 6th grade on Japan I have wanted to stay in a ryokan, the traditional inn.  From shoji screens, to tatami mats, sleeping on the floor on lovely futons, taking an onsen, the soaking bath, eating only traditional 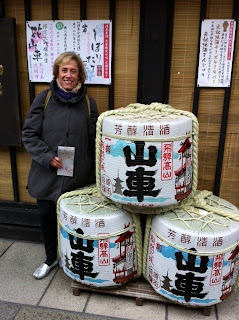 food-it was a real experience. Speaking of the onsen, we in the west scrub in the shower. Not in Japan….you enter a steam room, sit on a stool in front of your own faucet and bucket and scrub yourself  and rinse off BEFORE entering the very hot tub to soak.  It is very relaxing and I did it 4 times at the ryokan….in the am and pm. 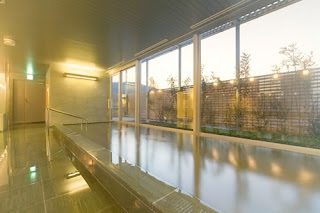 Kyoto:  When I saw my first sight of a geisha walking I was in Gion, a small district of Kyoto where geisha have lived since the 1600s.  It was 7pm and the sun was dancing on the canal, red lanterns were hanging and lit, lights in bars and teahouses were winking.  I turned a corner and there, gliding inches above the pavement, was a female figure clothed in flowing robes splashed w/ whorls of color.  Her face was a mask of white broken only by the scarlet of her lips. Flowers cascaded down from her knot of jet-black hair. And in an instant, she was gone.  And I kept looking for geisha the 3 days in Kyoto. 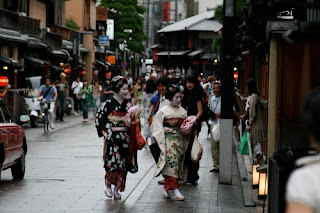 CERTAINLY a major highlight was the warmed up toilet seats.   Every hotel and ryokan toilet seat was heated.   You just can’t believe how wonderful it feels to sit on a warmed up
toilet seat until you do it.   The very first time on the first day I smiled to myself. 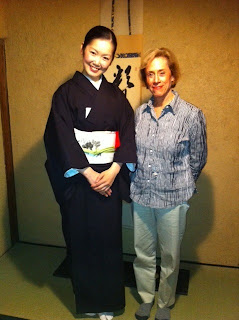 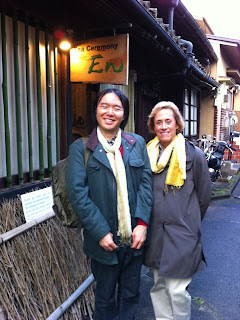 People: There are so many people in Tokyo it’s mind boggling. Think a NY street and multiply it several times. When the stoplight changes the sea of people move in a herd packed tightly together to the other side.   You’re actually in the sea. The majority of travelers I saw were Japanese. Of course it was cherry blossom time and they were just as excited and anxious as I was to see them all over, but especially in Kyoto. So many very pretty women, beautifully dressed. And when you see a handsome man, he is just drop dead gorgeous.
Tokyo is massive-the apartment houses enormous. There is no privacy, everyone is on top of each other but they all respect each other’s space. 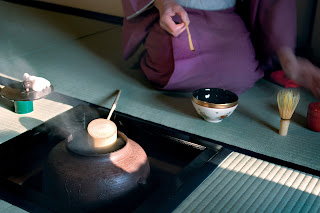 Tea ceremony:   I was lucky enough to be at 2 tea ceremonies-both similar in their choregraphy of making Matcha, a special tea powder that is whisked w/ a special bamboo implement.  The kimono dressed “hostesses” were beautiful young ladies, graceful in their movements, quiet and deliberate in their honoring and making the tea for my enjoyment.

Japan is an interesting, beautiful, eye opening destination for any world traveler.  I highly
recommend seeing this part of the world.

Posted by Unique Japan Tours at 11:13