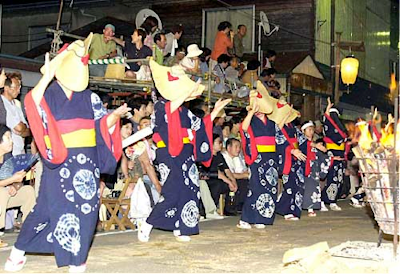 Traditionally, Japanese people like to take their holidays on mass. One of the biggest holidays of the year is O-bon or the Festival of Bon, which normally falls around mid-August of each year.

A Japanese Buddhist custom held in honour the spirits of one’s ancestors, O-bon has been celebrated in Japan for more than 500 years. Lasting for around three days, it is customary for people to take time off from work to celebrate the festival. This is done by returning to your ancestral family place, and then visiting and cleaning your ancestors’ graves. During this time the spirits of the ancestors are believed to revisit the altars.

One of the most fun aspects of O-bon is its accompanying dance, Bon Odori.  Said to have began around the 15th century as public entertainment, over the centuries its religious significance has faded into the background so that now the dance is associated with summer.

Each region in Japan will perform the dance slightly differently, creating its own distinctive regional twist. Usually what happens is that people – usually women wearing yukata (summer kimono) – will line up in a circle around a high wooden scaffold called a yagura especially made for the festival. The dancers will then proceed to move either clockwise or anti-clockwise around the yagura, or sometimes close to it and further away. Sometimes they sing while swinging their arms in the air – all of which is done in unison. Traditional Japanese music often plays in the background, which adds to the overall fun!

One of the biggest and most popular Bon Odori in the whole of Japan is the Tokushima Awa Odori that takes place on the island of Shikoku. Unique Japan Tours offers a trip to see the Awa Odori as part of its fabulous Lost in Japan Small Group Tour. However, please be careful if you do decide to go: You will be so excited that you won’t be able to stop yourself from joining in the festivities!!

Posted by Unique Japan Tours at 16:07