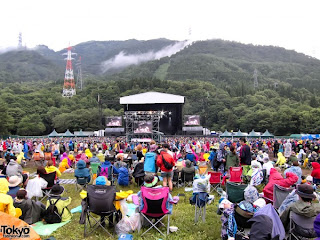 Summer is in full swing in Japan and that means one thing for music fans: Fuji Rock Festival. This year the festival will take place between July 27 and 29.

Although other popular music festivals do exist in Japan, nothing quite compares to Fuji Rock. After the festival moved in 1999 to its current location in Naeba, Niigata prefecture, approximately 150 miles northwest of Tokyo, the number of acts playing there has steadily increased. This year’s big-name acts will be the British band, Radiohead, who will be the headline act for the last day of the festival.

If you are a Liam Gallagher fan, then you will just have to go. The former Oasis singer will be playing with his new band, Beady Eye. British rock fans will also drool at the prospect of the recently reformed Stone Roses playing on the first day as the anchor act.

Liam’s brother, Noel will be on the main Green Stage on the middle day with his band, High Flying Birds.

Other “hot” acts to check out include the former White Stripes member, Jack White. His solo debut album “Blunderbuss” gave him his first no. 1 spot on the US Billboard charts.

Smaller though no less attractive stages include the likes of Sakanaction, Gossip, At The Drive-In and Purity Ring.